Before we go on, a stat for you. Only once since the Browns returned to the NFL in 1999 have they had a quarterback start in all 16 regular season games. He goes by the name of Tim Couch, and that was 2001. That’s just a small nugget for you as everyone weighs in on the decision made by Cleveland to name Brian Hoyer, and not Johnny Manziel, as their starter under centre for Week 1.

Pretty much the day after Seattle blew out Denver in the Super Bowl, all talk has surrounded ‘Johnny Football’, but it is Hoyer who is on course to start for his hometown team. The Cleveland native grew up in suburban North Olmsted and sometimes we forget he did lead the Browns to two, arguably three wins in 2013 before an injury curtailed his season. I say arguably because in the third game, he left it less than five minutes in after tearing his ACL. 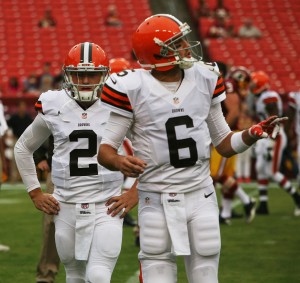 While Hoyer has had to rehab from said injury and answer a continuous stream of questions about the starting job, Manziel was more concerned with blending in to the background and acting like a rookie. Behind-the-plate seats at the ballpark, a different lady by his side every week, trips to Las Vegas and a middle-finger aimed at Washington’s defence have slightly dampened that unrealistic request of the youngster, but as I write his world seems rather fun despite being named the ‘back-up’.

But for how long? Not the fun, oh no, the fun will forever be a constant as long as R Johnny hangs with Drake and Kevin Durant. I’m talking about being a back-up. This NFL off-season has been solely about who will start; Teddy Bridgewater is pushing Matt Cassel all the way in Minnesota, even the Jaguars are pondering Blake Bortles for a debut this season after remaining adamant throughout the draft process that he was going to watch and learn from the sidelines for all of 2014. But a quick look at the Browns schedule and head coach Mike Pettine’s comments lead me toward thinking Hoyer’s starting job is fairly ineluctable.

Cleveland open their season in Pittsburgh before games against New Orleans and Baltimore. Then comes the dreaded early bye week. Uh-oh. So Hoyer, returning from ACL surgery, has the added mask of Manziel breathing down his neck and an estimated 50% of Browns fans screaming for the rookie to play. Add that to the slate of quarterbacks he faces before the bye; Ben Roethlisberger, Drew Brees and a resurgent Joe Flacco and you see the task at hand. Good old Johnny can learn the playbook a little more, familiarise himself with the pressures of game-day and most importantly look good for the cameras with his illuminating head set on. Oh how important he will feel with the gatorade towel, cup of water and newly-instated NFL tablet as he weighs in on Hoyer’s performance.

Hold on, I am unfairly presuming Hoyer will fail. On the contrary, he was undefeated as a Brown last season and those two concepts never adorn themselves to this team. Think Jason Campbell, Brandon Weeden and Thad Lewis in recent years. Not a winning trio, that.

A selection of what coach Pettine said – he isn’t my coach, I hasten to add – in a statement following his decision to elect Hoyer over Manziel: “He was the clear leader from the beginning. We’ve maintained all along that if it was close, I would prefer to go with the more experienced player. Brian has done a great job in the meeting rooms and with his teammates on the practice field and in the locker room.”

Saying Hoyer was the clear leader from the start is confusing. Both Hoyer and Manziel were dead-locked during training camp, and I am of the opinion that if Manziel had of done anything positive of note in his two appearances in preseason, and refrained from sticking his middle finger up at the Redskins defence in a stupendous act, he would be edging Hoyer as we speak. Pettine wanted to make his decision before Week 3 and he has done just that. But how much satisfaction can he get from this – Hoyer started Monday’s preseason game against the Washington Redskins completing two of six passes for 16 yards. Manziel, the No. 22 pick in the draft, completed seven of 16 passes for 65 yards and a touchdown. Manziel had to better a guy who yes, has veteran experience having played under Tom Brady in the past, but still completed a meagre two passes before being chosen. Not a lot to go on, inspector.

But Pettine’s most hard-hitting quotes exemplify the true problem with Manziel; regarding the locker room and practice field. Has Manziel shut his mouth and acted like a rookie? We don’t know. Has he acted like the big man on campus, like a college kid ruling the roost and not an NFL rookie? We don’t know. Has he turned up late for a meeting? Yes. Has he shown, convincingly, that he should start over Hoyer? No. Has he made mistakes? Of course, most rookies do. But rookies that ultimately succeed make mistakes on the field, not off them. That is if they wish to succeed. We haven’t heard a peep from Bridgewater or Bortles, and that’s a good thing. Both are studying and honing their skills, working on things they need to in order to make the gargantuan conversion from college to the pros. Manziel has continued to play the fool, unwilling to shed his image as a party boy. I don’t necessarily blame him, after all he is 22 years of age and has connections and sponsorship deals we all dream about. But his Heisman days are over. He is an NFL rookie now. If he understands that, and applies himself, he will soon be starting for the Cleveland Browns.

Brian Hoyer is a career back-up who will take a 100% winning record from 2013 into Week 1 at Heinz Field on September 7. The relationship between Manziel and his party image must be terminated from this day on. I am rooting for Hoyer to go 3-0, or even 2-1 before the bye. That’s imperative in order to keep what is for now his job. As for anyone who is narcoleptic about this saga, which shows no sign of slowing while this quarterback circus endures, for as long as Manziel has an NFL job – LeBron James’ return to Ohio has boosted proceedings – rightly or wrongly we will forever be talking about the Cleveland Browns.

Now who would have thought that after the nonperformance of Campbell, Weeden, Lewis and co. in 2013?