The 2014 NFL season gets underway tomorrow. Didn’t anybody tell you? For the avid football fan, it doesn’t as much get underway as it does explode at you like a Marshawn Lynch defense-splitting run through the trenches. I shouldn’t really advertise the skills of ‘Beast Mode’, The Beast Who Cared The Least when he delayed his training camp introduction over money demands that still wouldn’t have complemented his skittle fetish.

While it seems Lynch chimes about dollar bills more than Jay-Z and Rihanna combined, it is I who should be demanding more money as I brace myself for the purchase of Game Pass, the delightful app that enables you to watch every game live or as live. Joyous. I will stop short of advertising it further, after all the league has enough money already.

Oh how we have toiled and crawled; it’s always a long slog in the NFL offseason due to the tediously over-advertised, over-hyped – Thanks, Johnny – and over-exaggerated combine, draft and free agency period. Many forget that the latter may be the most important and yet least spoken about. Just think about how many free agents should impact their new clubs’ fortunes; Darrelle Revis, TJ Ward, DeMarcus Ware, Eric Decker and Emmanuel Sanders to name but a few. 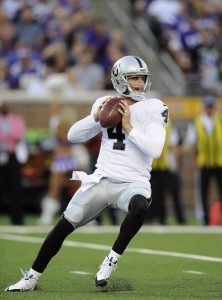 Those pesky rookies have done their very best to make the starting role their own; number one selection Jadeveon Clowney has gone about his business nicely, while Buffalo receiver Sammy Watkins, fourth overall, has had injury issues to deal with as he strives to re-brand and reboot Buffalo’s offence.

But the news, typically, is centred around the quarterback position. While we should marvel at the favourite for Rookie of the Year Brandin Cooks, the wide receiver selected 20th overall out of Oregon State University by the New Orleans Saints, we are more concerned this week about the only official Week One starter under centre who was drafted in 2014; Derek Carr of the Oakland Raiders.

First-rounders be damned. All Johnny Manziel did was stick a middle finger up at Washington’s defence and toil for long periods in competition with Brian Hoyer. Blake Bortles would have started in Jacksonville if it weren’t for Gus Bradley and his management team staying calm and confident about their sublime job security. Bortles has been mightily impressive in pre-season but for now Jags fans will make do with Chad Henne. Teddy Bridgewater was always going to play second fiddle to Matt Cassel, although he has a bright future.

No, the only quarterback from this year’s draft who will be starting in the regular seasons’ Week One is Derek Carr, taken 36th overall out of Fresno State, donning the black and silver of the Oakland Raiders against the New York Jets on Sunday.

Not that he will care what I have to say but congratulations are in order, young Derek. Well done.

It amuses me that we spent so much time talking about the other players. We don’t seem to give the right people a chance. Of course I understand that the media drives this phenomenon. If not for the podcasts – which guilty as charged I listen to on a daily basis – articles and programmes highlighting the Manziel’s of this world, the money sign Michael Sam orchestrated in order to rub Johnny the wrong way in a pre-season game would mean absolutely nothing. We scrutinise them, we portray them any way we like, but we long for stories that we’ve had this summer.

Derek Carr was perhaps more famous for being the younger brother of David Carr, a former Fresno State star himself who showed huge NFL potential. Problem is, David stunk the place out after the Houston Texans took him first overall in the first round of the draft back in ’02. Then came the rumblings; Surely The Texans wouldn’t select his younger brother with the first overall pick this year and once they didn’t, it no longer filled our appetite for tasty news. Derek became a mild dish as he competed with new Oakland signing Matt Schaub, not exactly the chilli-infused starter himself after a horror showing in none other than Houston last season.

Derek Carr, although now well placed in Oakland following a scintillating display against Seattle in the final preseason game, will inevitably be compared to his brother at least in the short term. One league executive said David Carr’s biggest problem “were his genetics”, but one may forgive him for playing on a terrible Texans team that led to Carr being sacked 249 times in five years.

Do we expect Oakland to get back to .500 this season? I expect them to do that before the latest crop of Carr gets sacked in that proportion, but I am not holding my breath. Oakland have been a losing franchise for too long, and perhaps the only thing stopping them re-entering the City of Angels, who already have an Angels team doing pretty well in the major leagues, is Derek Carr being successful.

Good luck to him in Raider Nation. And of course, enjoy the opening weekend.