Those are the words of Rex Ryan, the eighth head coach in the past 18 years in Buffalo, striking out the media – who would greatly receive The Outspoken One – with serious cheese. Whiff. Did the Bills hit a home run? Well, 52-year-old Ryan has just inherited a team with a very good defence and no quarterback. This is the moment we are supposed to ask: “Does this sound familiar?”

Is this a perfect fit for owner Terry Pegula, whom the new head coach will report directly to? Ryan was on the “Dan Patrick Show” on Thursday, raving about his quality defence and the strength of his coaching team on that side of the ball; the arrival of Dennis Thurman from the same role at the Jets firmly at the top of the class. What is for certain, defence aside, is the honest truth that Ryan does not develop quarterbacks. Never has, never will. He wants his defensive group to consistently be placed as the number one ranked in the league; Buffalo were fourth last season. How much can he improve this group – a slice of the now retired Kyle Orton aside the reason they won nine games in 2014 – when they are already this good?

He is bringing in Greg Roman, the former offensive coordinator for the San Francisco 49ers, to solve the problem, a problem that is vast: The Bills have averaged 4.92 yards per play over the past two seasons, the third-worst mark in the league. 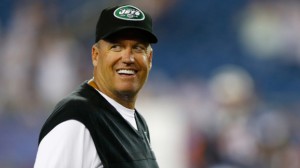 Would Roman be willing to take a few snaps? Not if the rumours circling around the team are true: Mark Sanchez may be coming to town. Ryan was firm in stating this will be his last head coaching job – “The last team I will ever coach will be the Buffalo Bills, and I hope it will be 15 years from now” – but not so firm confirming or denying if he will bring in free agent and former quarterback with the Jets Sanchez. There isn’t much out there, but then again there isn’t much in unless Ryan wants to watch E.J. Manuel play around in the snow before his NFL coaching career ends prematurely. Media henchmen can now inherit this wishful thinking if their goal of getting his open views onto mainstream television is to come to fruition.

Ryan said he is currently in the evaluating process regarding the quarterback situation, stating of Sanchez and a possible reunion: “That might be one of the options. We will look at everything, but right now we are trying to put a staff together. I know Mark is out there and I am very familiar with him, but I haven’t talked to him.”

Not yet. Maybe Rex didn’t want to upset the current depth chart, avoiding the awkwardness of upsetting individuals before arriving; a worry for the Atlanta Falcons, who passed on him after the interview process.

Ryan will be burning plenty of firewood, insisting he wants to live in the snowiest part of Buffalo, which coincidentally falls between every part of the 52.5 square mile city. “The snow is something we will embrace. It’s part of the community; when people are here they stay here – it could be because they love it here or they’re snowed in. I want my team to represent the community. We are going to be tough and physical and the community will embrace that.”

But seriously, what about Sanchez? The prospect of a former fifth overall pick-turned butt fumbler-turned Eagle is an intriguing one, but first you must cast an eye on the run down of free agents. On a list that begins with the likes of Michael Vick, Shaun Hill and Ryan Mallett but ends with Tyler Thigpen and Jimmy Clausen, one name stands out that could be a better option than Sanchez: Brian Hoyer.

Hoyer is not going to wow you or bring in an abundance of talent, but he would arrive with a steady head, someone who has dealt with the Johnny Manziel saga in a professional manner and doesn’t carry the stigma of a Sanchez. It comes down to who Roman and the rest of the staff believe is more versatile to advance this team from 9-game winners to division and playoff contenders.

That very staff is looking like a mirror image of the Jets right now, who conveniently for viewers will meet the Bills twice next season as a division foe. Ryan will relish that rivalry and has added linebackers coach Bobby April III, defensive line coach Karl Dunbar, defensive backs coach Tim McDonald and tight ends coach Tony Sparano Jr., all of whom were on Ryan’s coaching staff in New York. He also brings in Donnie Henderson – with the Jets in 2004-05 – to coach the secondary. You cannot deny that particularly Thurman is a solid hire, someone who led the Jets to finishing sixth in total defense (327.2 yards per game) and fifth fewest in rushing yards allowed per game (93.1) this past season. Of Thurman, Ryan said: “He is a great football coach. He was a great player in Dallas, a tremendous person and one of the smartest people I have been around. It starts there.”

Condolences to the now former defensive coordinator in Buffalo, Jim Schawrtz, whose crowning moment in his lone season could be a selection of taking his group to a league leading 54 sacks, producing three Pro Bowl linemen or being air-lifted off the field by his players in Detroit.

No doubt Ryan is excited with his combination of personnel, a group who are going to have a heavy influence on how this roster is shaped from now until September. The Bills do not have a first round pick this spring, but they already solved that with Sammy Watkins last May. Ryan will feel a desperation to improve on his overall record with the Jets, which was 46-50, but for someone who sees “The City of Good Neighbors” as his final NFL coaching destination, he will want to make many on what he proposes will be a long and lasting relationship with the city and its football team.