There is something that the powers that be do each and every April – I have now opened the floor for a separate debate on whom or what those powers may be – that make the world we live in a sunnier, warmer and frankly beautiful place to live. At least in baseball terms, you could be residing in one of the harshest climates on the globe and you would still wake up to glorious sunshine during the month that has us fascinated by the beginning of the new season and the climax of the NBA campaign. But I can’t mention basketball again in this piece, because I’m trying to keep the hope springs eternal element, well, relevant.

I’m sitting outside my house in north London on the 20th of April and what I am witnessing is exactly what I have for the entire month; blue sky and Mediterranean-like weather. Throw in three days in Barcelona and I really have been spoilt. And there is something about my Los Angeles Dodgers – yes, I now have shares within Guggenheim Group – winning six straight to begin the season 8-3 that brings a cathartic feel to all else I do. Back to saying ‘my’ Dodgers for a second, I do chuckle when people say that. As supporters we do have to pay to support our teams, even fans of Newcastle United who said they were boycotting St James Park against Tottenham on Sunday but by the looks of things had forgotten how to not worship their bang average side, but we are essentially slaves to rich individuals who for the most part couldn’t give a toss about our feelings for the shirt they wear. We rarely have an effect on their results, in the long run. 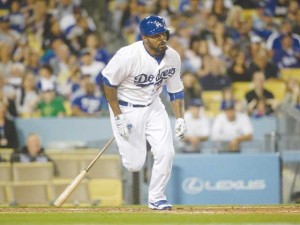 Even so, baseball effects the weather. I am certain of that. Although contradicting that by checking into weather apps on a daily basis to configure my wardrobe habits for the day, I have a water tight belief that now Major League Baseball is off and running, we are better for it. My Dodgers, or those Dodgers, are playing great and it’s really positive to see that the specific changes the front office made – I will take no credit for these transactions on this occasion – are having a direct and early impact on the 2015 season. Matt Kemp and Hanley Ramirez are gone and there has never been a team under Don Mattingly look so together. The transition has been seamless, and it wasn’t expected to be that way. Think about it; your two most dangerous hitters, excluding Adrian Gonzalez, are gone, while Mattingly still has to deal with the outfield logjam Andre Ethier problem. This correlates back to another major move the team made this winter, bringing young buck Joc Pederson up from the minors and having him be a regular position player in centre field (or center in Los Angeles). But Ethier is producing when called upon, Pederson has started well and most impressively the middle infield dynamic duo of Jimmy Rollins and Howie Kendrick has fans gushing over not only a solid defensive unit but the best offence in the National League.

The Dodgers have hit 17 home runs in 11 games to top the NL while 13 of those have come in nine games at Chavez Ravine, a staggering statistic considering its pitcher-friendly reputation. Plating 63 runs also places them atop that particular category in the NL, but none of it surprises Mattingly publicly who said that because of the losses of big name stars, his team has had to fight and battle for every out which naturally makes them better.

What also makes the day better is live baseball at four in the afternoon London time, which is exactly what we have right now with Boston and Baltimore starting early at Fenway Park. NESN have a great broadcast and my ears salute them just as Mattingly salutes his savvy veterans and the improvement they’ve had on his ballclub.

Rollins had a huge impact on Opening Day with a go-ahead home run in his Dodgers debut, but more importantly his post-game comments to persevere and play hard every single day truly resonates. In most game recaps, of which I watch 90% of a season, they almost always include himself and Kendrick running the base paths and having a say on the final result. This new-look team are playing with a swagger, led by Gonzalez but producing throughout the roster. As unpredictable as it was, it sure brings a glow as bright as this weather that the omnipresent baseball Gods bring every single season.