My predictions have gotten to a point where predicting that I will be wrong is the safest bet. The Packers did not defeat the defending champion Seahawks in Seattle. Aaron Rodgers did not go into CenturyLink Field, silence the 12th man and lead Green Bay to a convincing win. What on earth was I thinking? Suffice to say my Packer-heavy fantasy team suffered mightily but amidst that rather small tragedy, I must draw one other startling conclusion from this; Seattle look scarily good, better than the 2013 super-powerful, super-assured, Super Bowl winning side. 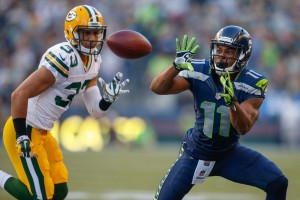 One individual who made Pete Carroll’s team look, if this is possible, much improved last night; Percy Harvin. Injured for the majority of the last campaign before returning in the playoffs, the wide receiver/put-him-wherever-the-hell-you-want speed machine was wreaking havoc from the off. As I just mentioned, Harvin was limited last season after a move from the Minnesota Vikings which excited Seahawks fans and instilled fear into all others. But Harvin’s debut season in Seattle was delayed until November 17, when funnily enough he played against his former team, but after that he was sidelined until the postseason through another wrath of injuries. He missed the NFC title game but made it back in time for the Super Bowl against Denver, where he led the team with 45 rushing yards and returned a kick-off 80 yards for a score.

I fondly remember the fly sweep which he ran so elegantly in the Meadowlands in February. Here it was again last night as Russell Wilson, ridiculously efficient once more, handed the ball off to Harvin, who came from the far side, emerging in a flash which manages in its entirety to maintain the sleepy-eyed British viewers’ attention at such a late hour.

The first Seattle play of this early season, one which goes by far too quickly, was a short throw to the left straight into the hands of Harvin. Only a four yard gain, but it exemplified everything that Seattle will embody this season. Efficient, not too flashy, prepared and most importantly, a proven play which will carry them deep into the playoffs once again. The fact that it landed in the hands of a guy who will be the fulcrum of their offence, along with running back Marshawn Lynch, tells you even more.

Regarding the aforementioned Lynch, now 28, everybody assumed and predicted his fall from grace this summer. His wage demands, not met by Seattle as it failed to fit into the stubborn GM John Schneider’s precise pay structure, certainly didn’t help the running backs selfish reputation. But Lynch, who had limited carries in preseason as is the norm in order to protect him, was back to his best as he powered his way through the Packers defensive line. A new era of running was assumed, but Lynch showed just why there is plenty left in a tank that has 285, 315 and 301 rushing attempts in his three years with Seattle. His 110 yard performance on this day, including two touchdown runs, was a strong riposte to his critics. Call it what you will; violent determination, fearless ferocity, Lynch continues to get the loudest fans in the league cheering his name as he storms his way to MVP-type numbers year after year. 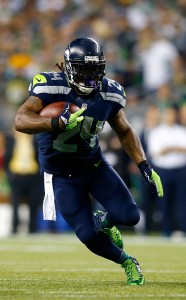 Seattle’s 36-16 victory, and yes it was a 20 point demolition if you hadn’t stopped to check, wouldn’t have been complete without a full marks display from quarterback Wilson, who carried his immaculate preseason form into Week One with a line reading 19-28 passing, 191 yards, two TD’s and zero interceptions. That last line should have read one, and if it did the game may have been different as the Packers intercepted a pass which was then batted down by a Seahawk receiver. A great play which led to the pass falling incomplete and consequently kept the balance of power even in the early stages.

Although I follow Wilson on social media, I much prefer watching him on TV than reading his tweets. I will say no more but you can see for yourself the general topic Wilson types about and believe me it is not football. But his attention to detail, focus and drive to win is unmatched and it is perhaps the continuing noise from some quarters, even after his Super Bowl win in his second season, that he isn’t an elite quarterback that drives him every day. Wilson’s biggest critic is himself; he has the most wins over the first two seasons of a career in NFL history and has only lost one home game, ever.

One has the feeling after this display from Seattle that with an organisation run supremely well from top to bottom and a defence known as the Legion Of Boom not even mentioned in this article, the ‘Hawks are on their way to another special season. With the slate of games this coming Sunday the first of 16 weeks of action, someone better match this team soon or the NFC’s elite will have to travel through this stadium if they wish to reach the first weekend of February in Arizona. 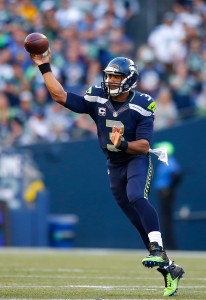 The Seahawks last night became the first Super Bowl champion to open with a victory since the 2011 Packers, one thing they can cross off on their ‘to do’ list. Another that they may want to look into is this; none of the last eight Super Bowl champions have won a playoff game the following year. With their most recent performance at the forefront of my mind, Seattle are ready to win more than one playoff game in 2014.