With the bright sunshine insisting we are on the cusp of spring, two of the most ridiculous, prolonged but greatly followed and loved events are beginning. Spring Training and the NFL combine; two humorous processes that we love to talk about but which we should always remember to distinguish.

For you couldn’t ask for two separate pre-season rituals, which can be as entertaining as they are addictive. The combine, for me, is mind-bogglingly funny. Old men in shorts, preferably creamy beige, holding stop watches and if they feel edgy perhaps a whistle, too. They gaze onto the vast field at Lucas Oil Stadium, taking in the beauty of college athletes in tight shorts; athletic freaks who are even more preposterous when you take the pads and helmets off. How bizarre. Not to mention the reactions of the scouts – “Oh gosh, he can run a 40 in 4.5 seconds” – are even more bizarre seeing as they mean nothing. Absolutely nothing.

Spring training, hosted in both Florida and Arizona, is a safe haven for baseball nuts. The mere sight of gloves on freshly cut grass, players aimlessly stretching as if they haven’t worked out since September and the obligatory water sprinkler running motion in the background bring joy and hope to all baseball fans. As pitchers and catchers report this week and full team workouts begin the week after, the ‘hot stove’ season is officially over. Does anybody actually think there are fans in their team apparel, kneeling in a wooden hut beside a fire and dreaming of a winter blockbuster? Probably not, because they’re all watching the NFL. 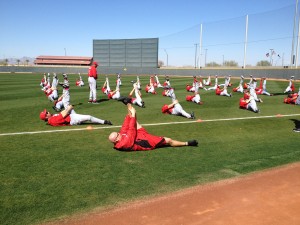 From the outside looking in, spring training looks like a whole lot of fun. When you look at images of players shagging flys and running ground ball drills, it is a far cry from the emotion and application of a playoff series. Madison Bumgarner in his first bullpen session and Bumgarner embracing Buster Posey after a World Series Game 7 shows you just how long and gruelling the baseball season is, but yet reminds everyone that this period of integration and preparation is vital, if not slightly overhyped with all 30 teams proclaiming they are ‘targeting a world series run’.

Spring training by major league teams first gained popularity in the 1890s but were, unlike today, originally hosted all around the country. The Yankees first trained in New Orleans and the Cardinals in Arkansas. Since 2010, major league teams have been split down the middle with 15 teams in Florida and 15 in Arizona.

Disposing of the tobacco chew and back to the combine, the ferociousness and high speed action is everything the Grapefruit and Cactus Leagues are not. Under Armour and bulging muscle is enough for NFL Media to host its 11th season of exclusive multi-platform coverage in 2015, with a more-than-stupendous 45 hours of live coverage as we witness the elite quarterbacks turn down the opportunity to throw and beasts to freaks of nature impress then break down before the regular season even kicks off. Did we not spend every waking hour last offseason discussing the man many hoped would become a franchise leader but is now a recovering one in rehab, Johnny Manziel? How do networks promote the chance to ‘have a close-up of Heisman winner Marcus Mariota and Florida State supremo Jameis Winston’ when both have huge question marks for their professional prospects? Why do we care about combine results? Well, fans want to act as GMs for their fantasy teams and see what talent they might wish to pluck from the board. For scouts it is their livelihood, except they have become so fascinated and engrossed with the numbers that they fail to see the upside in anyone who doesn’t have the traditional and ‘optimal’ height and weight to play in the pros.

If a player runs a quick 40, he’s good. If he is a quarterback standing at 5 feet 10 – Russell Wilson anyone? – he isn’t a prototype player and won’t transition well enough. Did anyone mention that running a fast straight line 40 doesn’t mean said player can run around players, cut well, holds speed and power to break tackles all while being able to absorb powerful, consistent hits. Let’s also factor in the climate controlled conditions, a domed stadium in Indianapolis providing a great environment for the players. The quarterbacks are throwing to open receivers, not ones in multiple coverage. They don’t have an oncoming rush, or icy conditions which are common place in a season which takes place between September and January. How much stock would a team put on bringing a prospect into their stadium, against their players, in a normal environment for the season? You would assume quite a lot. 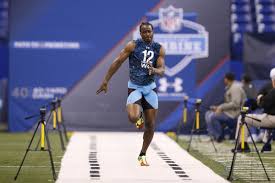 If you’re an apologist for the combine, then a sorry might be necessary at this point. Of course there are advantages, and it is a good showcase for the prospects. But while it is premature and unrealistic to expect everyone to suit up and scrimmage to showcase their actual football abilities, a reform may be in order if scouts want to earn their money and focus on what really matters: intangibles and attitude.

In spring training, players are also attempting to show that they are talented enough to make the final 25-man roster, or at least stick around in the minors and hope to come up at some point during the season. But the relative slow-pace at which it is carried out and viewed is a completely different experience. Both are enjoyable in their own setting.

The stories heading into the spring in this major league season are vast. This is the beginning of the end for Alex Rodriguez, who will bring a circus with him to George M. Steinbrenner Field next week. Max Scherzer got his money – Scott Boras too – and now has the task of leading a champion in Washington. There is the return to the mound of Matt Harvey, Masahiro Tanaka and Matt Cain. The Padres have a potential world beater or disastrous defense in their new-look outfield of Matt Kemp, Will Myers and Justin Upton. The Red Sox are moving Hanley Ramirez to left field and are introducing Pablo Sandoval. Chicago is rejuvenated with the Cubs and White Sox both splashing out in the winter with the hope of making the postseason. The Yankees are without Derek Jeter and a face of the franchise for the first time in decades. And don’t forget baseball has a new commissioner, Rob Manfred, who has two schools of thought: Get more youngsters playing the game, and get that game sped up.

Two intriguing phenomenons, both very similar and very different. As is the age we live in, there’s no way you can miss either.